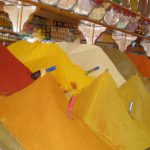 In our house, turmeric and cayenne are like salt and pepper!  We put them in our salt and pepper shakers and sprinkle them on almost everything!  These colorful and potent spices are two of natures most powerful healing herbs on Earth and have been proven to be beneficial in the treatment of cancer, heart disease and an array of other health conditions.   After reading the following information, you may decide to swap out your salt and pepper shakers for these two delicious spices as well!
.
Turmeric
.

Turmeric has been used for ages in Indian and Chinese medicine as an anti-inflammatory.  The active ingredient is the bright yellow pigment called curcumin.  Turmeric is a strong antioxidant that has been effective in the treatment of Cron’s disease, ulcerative colitis, rheumatoid arthritis, cycstic fibrosis, alzheimer’s disease, cancer and more!  My favorite turmeric facts state that turmeric:
.
1) is a natural detoxifier of the liver,
.
2) is a natural painkiller,  (it appears to have no toxic effects on the body, even though it has been shown to be as strong as potent drugs such as hydrocortisone and Motrin),
.
3)  is a natural antiseptic, antibacterial, anti-inflammatory and antioxidant,
.
4) has been used as a treatment for depression in Chinese medicine,
.
5) speeds up the healing of wounds,
.
6) may help prevent colon cancer,
.
7) when eaten with cruciferous vegetables such as cauliflower, brussel sprouts, kale and cabbage, it has proven to slow the growth of prostate cancer,
.
8) can reduce the risk of developing childhood leukemia, according to recent studies, and
.
9) lowers cholesterol.
.
10) Studies have shown that turmeric may protect against neurodegenerative diseases such as Alzeimer’s Disease.
.
11) Studies have shown that turmeric may block the progression of Multiple Sclerosis.
.
12) Studies have shown that curcumin, a powerful antioxidant in turmeric, inhibits cancer cell growth and metastases, and helps in the prevention of cancer (breast, stomach, prostate, skin etc.)
.
Cayenne Pepper
.

Aside from being a wonderful hot spice for many food dishes, cayenne is an amazingly powerful medicinal herb.  It has been used to heal heart problems including heart disease and heart attacks.  It has also been used for healing wounds, ulcers, influenza, high and low blood pressure, pain reduction and more.  The hotness in cayenne pepper is a substance called capsaicin which is also the main medicinal property.  My 12 favorite facts include that cayenne is:
.
1) known to stop heart attacks within 30 seconds (1 tsp cayenne in a cup of warm water)… I keep a jar in my car, just in case someone needs it in an emergency…
.
2) to reduce blood cholesterol and triglyceride levels as well as lower blood pressure.
.
3) It is used as an immune booster and is high in vitamin A, relieves headaches and is
.
4) an anti-inflammatory (like turmeric) and an effective treatment for arthritis and reduces inflammation,
.
5) effective at healing wounds and rebuilding tissue and also stops external bleeding if poured on wounds,
.
6) known to speed up one’s metabolism when consumed with lemon and water,
.
7) energizing and helps to overcome fatigue, increase stamina and is a natural stimulant.
.
8) Cayenne boosts circulation and enhances cardiovascular performance,
.
9) has been known to stop hemorrhaging in lungs, stomach, uterus and nose when taken internally and
.
10) can clear up hemorrhoids when taken regularly.
.
11) Dr. Soren Lehmann of Cedars-Sinai Medical Center found “Capsaicin (found in cayenne) had a profound anti-proliferative effect on human prostate cancer cells in culture.”
.
12) Dr. Schulze had a patient who dissolved his brain tumor by using massive doses of cayenne pepper (10 tsp / day for the first month).

More from my site

« ENZYMES! The Most Important Element to Vibrant Health
We Started a Meetup! »